"Peace and Plenty The Reward of Temperance"

"The Lure of Drink is doing more damage than all the German submarines together"
David Lloyd George 1915.
(British Minister of Munitions, who became Prime Minister in 1916)

This is the quote on the certificate below, issued by the Independent Order of Rechabites and signed by my Great Grandfather, James Pilgrim on 11th June 1916. 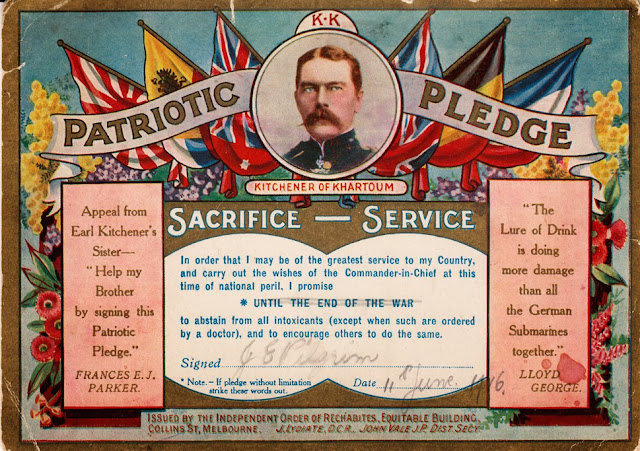 The Independent Order of Rechabites (IOR) was established in 1835 as part of the British Temperance movement to highlight the dangers of alcohol consumption and encourage abstinence from alcohol (and in present days also drugs).  It seems that the movement became very popular during war times but it is now relatively unknown.


In March 1915, The Tablet (a British Catholic journal published since 1840), reported an interview with Minister of Munitions, Lloyd George;
"There are some, I am sorry to say, who shirk their duty in this great emergency.  I hear of workmen in armaments works who refuse to work a full week's work for the nation's need.  What is the reason?  They are a minority.  The vast majority belong to a class we can depend upon.  The others are a minority.  But, you must remember, a small minority of workmen can throw a whole works out of gear.  What is the reason? Sometimes it is one thing, sometimes it is another, but let us be perfectly candid.  It is mostly the lure of the drink.  They refuse to work full time, and when they return, their strength and efficiency are impaired by the way in which they have spent their leisure.  Drink is doing us more damage in the war than all the German submarines put together." 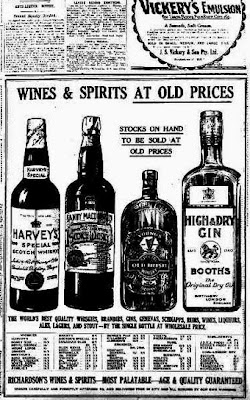 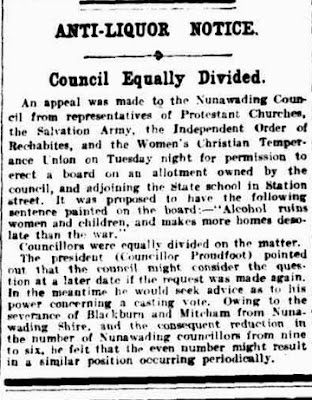 "Alcohol ruins women and children, and makes more homes desolate than the war"
The Argus (Melbourne) page 17 - 9 September 1925
Source: www.nla.gov.au
It seems ironic that the above Anti-Liquor notice was directly above an advertisement for wines and spirits!

My grandfather, Gordon Walker,  at 13 years of age, also became a member of the Independent Order of Rechabites.  Look closely at the art work on his certificate below.  I do like the art work and the multitudes of symbolism. In ancient Egypt, the sun and moon represented the eyes of the gods.  The snake has also been known to symbolise fertility and the umbilical cord, joining humans to mother earth.  The wattles at the bottom and the kangaroo on the lady's apron (bottom right) represent the Australian branch of the IOR. I can see at least 10 other parables. What do you think? What else do you see?