He was only 10 years old (1), but he was indirectly killed due to the war.  He did not have the
opportunity to meet the girl of his dreams, marry and have children,  but his memory lives on.

"They shall grow not old, as we that are left grow old;
Age shall not weary them, nor the years condemn" (2)

He was only 10 years old (1), but he was indirectly killed due to World War I.  He did not have the opportunity to meet the girl of his dreams, marry and have children, but his memory lives on.

On Easter Sunday (21st April 2019), my husband and I were walking across the Victoria Bridge in Brisbane, as we have done on many occasions.   It was starting to rain and we were heading for the train station, but for some unknown reason,  I walked off the main pathway to read the plaque on the stone archway at the end of Victoria Bridge.


"EVERY LAND IS HIS NATIVE LAND TO A BRAVE MAN
NEAR THIS SPOT AS A RESULT OF
A LAMENTABLE ACCIDENT, WHILST
WELCOMING RETURNED SOLDIERS,
HECTOR VASYLI
WAS KILLED 9TH JUNE 1918.
AGED 11 YEARS.
DURING HIS BRIEF SOJOURN ON EARTH,
HE DEVOTED MUCH OF HIS TIME TO
PATRIOTIC WORK FOR AUSTRALIAN
SOLDIERS DURING THE GREAT
EUROPEAN WAR.
IN HIS VEINS RAN THE HEROIC BLOOD
OF GREECE, AND IN THE BREAST OF A
CHILD HE CARRIED THE HEART OF A MAN.
------------
THIS TABLET WAS ERECTED BY
THE RETURNED SAILORS AND SOLDIERS
IMPERIAL LEAGUE, HELLENIC (GREEK)
ASSOCIATION AND CITICENS(3) OF BRISBANE"


I wanted to know more about poor little Hector.

Hector touched the souls of many, in his short life. "He devoted his Sunday to the heavenly things instead of spending his time in idleness and earthly amusements" (4). He was an altar boy at the Anzac Church."He had friends amongst yellow, black and brown people, and a little black boy was his most devoted and affectionate friend.  At his coffin tears were shed by white and coloured people.  Many an old invalid got some food from him.....and many poor souls blessed the little hand of this good-hearted dear boy.
His patriotism to his country and its brave soldiers was a great example indeed.  He did his bit for every patriotic fund, collected money, sold badges.......There were his little hands working in the interests of our soldiers, to make their return to home sweet for them.  He saved every penny (he was a paper boy), not to buy sweets for himself, but packets of cigarettes for our returning heroes....He would have loved to buy a football, but instead of saving his pennies for that purpose he spent them in the soldiers interests".(4)
Hector "never missed an opportunity of greeting returning soldiers as they proceeded from Central station to the Kangaroo Point hospital.  All his savings were spent in purchasing flowers, cigarettes and other things, which he gave the men as they passed by.  And he met his death while carrying out his noble service". (5)

Hector was killed by a motor-car while welcoming home soldiers. "This little silent worker, it is sad to say, met his end on such a good-hearted mission."(7)

"On that fatal Sunday he had four packets of cigarettes and a bundle of wattle, and stood there, waiting for the soldiers, to show them his respect and affection" (4)

There was a procession of more than 60 vehicles taking wounded soldiers to the Military Hospital at Kangaroo Point. A group of four or five boys, including Hector were stationed at the side of the bridge. One of the cars in the lead slowed down suddenly (reportedly to avoid a lady crossing the road), which resulted in a following car, containing several returned soldiers, swerving to the left avoid a collision with a car ahead. Unfortunately, the car knocked Hector down and the wheels ran over him.  Hector hit his head on the pavement, fractured his skull, fractured his right arm and had many abrasions and contusions.  He was immediately picked up and taken at speed to the Mater hospital, but he had already passed.

The high number of articles, appearing in Newspapers all around Queensland, is a reflection of how much Hector's tale impacted people.

In addition to the memorial tablet, on 10th July 2018, a memorial service was held at the South Brisbane Boys' State School (now the Brisbane State High School on Merivale Street) and a fig tree was planted to perpetuate the memory of Hector Vasyli (10).  I drove past today and there are two big fig trees at the school.  I shall try to find out if Hector's memorial tree remains.

On the 21st August 1919, Mr & Mrs DG Vasyli had the greatest pleasure to announce the birth of a son named Hercules.
"which event they regard to be a consolation granted to them by the Lord.  In His mercy for the loss they suffered when He called up to Him their dear beloved boy, Hector." (11)


"In loving memory of my little friend, Hector Vasyli, who was accidentally killed 9th June 1918, while welcoming returned soldiers home.
One of the best that God could send,
Beloved by all, a faithful friend,
Called home from those who deeply love,
To gain a glorious life above.
With aching hearts and tearful eyes
We linger where our dear friend lies,
And breathe those sacred words once more,
Not lost, but only gone before"
Christie and Charlie Marneros
The Telegraph, Brisbane
Monday 9th June 1919, Page 4

(2)  From the fourth stanza of the poem, Ode of Remembrance, by Englishman Laurence Binyon

(3) The spelling of citizen is incorrect on the memorial.

Alona from Lone Tester blog has set us this geneameme for National Family History Month. The rules are as follows:
What places do your ancestors come from?
Using the alphabet how many letters can you name ancestral places for? Some you will no doubt know well, some you may not … at least not yet (see my letter ‘I’ and ‘N’ examples below). I still have more research to do on those lines.
It doesn’t have to be where your ancestors were born, but it does have to be a place that they were associated with. For instance they lived or worked (or died?) in that place.
Most of the places that I have listed,  relate to direct line Ancestors.  Hopefully,  someone searching Google will find this post and contact me!

She had the light of battle glimmering in her eyes

MOE's OLDEST FILM FAN WILL BE THERE


In the long queue that tensed as the box office opened to book the first reservations for the new Civic Theatre, Moe, on Tuesday, there was the oldest and keenest movie fan in the district, and perhaps, all of Gippsland.

With the lively intention of getting a seat in a position most closely alike to the one she had occupied in the old Mechanics' Institute picture show for 30 years, she had the light of battle, should it be needed, glimmering in her eyes.

Mrs M. Walker, a film-lover to be respected, of the Princes Highway, who was 78 years old on January 20, knew what wanted and got it.

Before being satisfied with picked positions offered by the theatre staff, Mrs Walker several times inspected the actual seats and finally had the assistance of the proprietor himself, Mr Rex Hamilton.

He ensured that Mrs Walker secured an end seat that pleased her, on her chosen aisle, where she will be as contented and considerably more comfortable than in "L-1" in the Mechanics Pictures.

"I think this is something beautiful" said Mrs Walker to an "Advocate" representative, as she looked happily around.

The old lady became a regular customer early in the same seat very soon after the opening of Moe's first picture show; and having seen through 'twenties', occupying the same [seat, she has seen] stars come and go on the silent screen and sat through the development of talkies, and now will see the wide screen usher in a new era.

Asked what films she preferred, she replied, "I like religious pictures, and romantic ones, but I don't think much of those that have a lot of shooting."


So tonight, when Moe sees its first Cinemascope widescreen film in color in the town's new, modern, airconditioned theatre, there will be among those present the little lady who admits her greatest love is the 'movies' and who probably knows as much about them as any picturegoer in Gippsland.

She'll be there alone - but just exactly where, we are not telling.

Take a few moments to have a good look at the photo below.

What are your thoughts?  How do you feel?  What do you see?

This is likely the final resting place of my first cousin (twice removed), who died at Polygon Wood three days before this photo was taken.  He was only 20 years of age.   The photo above shows other members of his Battalion, scouring the battlefields, searching for survivors.


Richard Royal James Weir (aka Roy) was born at the small farming community of Kinimakatka, in Western Victoria, Australia on the 21st August 1897.  He was the third of the four children of James Weir and Catherine "Amy" Page Pilgrim.

Roy would have been the "man of the house" from a young age as he was only six years old when his father died.  He became a plumber prior to his enlistment.
Although he listed his age as 18 years and 11 months when he enlisted for duty in 1915, he was actually a year younger but he had the written approval of his mother to join up.1


After his death the local paper reported "He was very popular amongst the young folk of Nhill, who deeply regret the passing of a sterling young comrade.........The flags in Nhill were flying at half mast on Tuesday as a tribute of respect for the gallant young soldier, who made the supreme sacrifice while fighting for his king, country, and those who stayed at home" 2

I cannot begin to imagine how his mother felt, when nearly 12 months later, she received a package containing her late son's belongings; 2 torches, a razor, brush, 2 maps, a book and a belt.1

Today, on this ANZAC Day3, nearly 100 years since the death of Roy Weir,  I remember my cousin, who would have seen unimaginable horrors at such a young age and who did not get the opportunity to have children or to live a full life.

They shall grow not old, as we that are left grow old:
Age shall not weary them, nor the years condemn.
At the going down of the sun and in the morning
We will remember them.
LEST WE FORGET


I deliberated before completing this post as nothing in it has been verified and I have been told conflicting stories, so do not know what to believe!

I am hoping that someone who is related will read it and correct me or assist me!

My husband's family could not tell me much about their family.  I find it very difficult to understand that you would not know the names of your grandparents!  When we visited Germany in 2006, we were provided with conflicting information, which I been unable to verify.

I was told that Alois Fritz was married to Regina Zelicz. However Regina is not named as being in the photo?  Had she already died and therefore is it  Alois' mother is pictured?  There are more children than kids named?

Back in 2006, when I received the information,  I was early in my genealogy journey and didn't notice the anomalies or ask the right questions!  I look forward to getting back to Germany (and visiting Romania and Poland) and potentially finding out more! 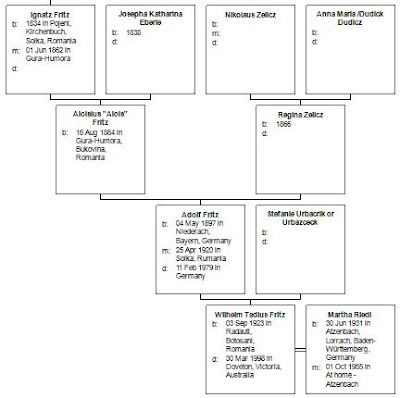