I have not completed any family history research or blogs for over two months but thank you to Pauleen from Family History Across the Seas for proposing this Australia Day Challenge and prompting my return.

My first ancestor to arrive in Australia was:
Samuel Mottram, who arrived at VanDiemans Land (Tasmania) on 8th August 1838,  aboard the convict boat,  Lord Lyndoch.  He was 38 years old.  It is uncertain if he was accompanied by his young wife Catherine and daughter Margaret or if they followed him soon after.
Samuel was not a convict.  He was a soldier in the British Army who was escorting 330 convicts to Australia.

I have Australian Royalty (tell us who, how many and which Fleet they arrived with)
I thought for a while that my elusive Elias Jones was a convict.  However, I was disappointed after researching three convicts name Elias Jones to find that none of them were my ancestor. So no, I do not have any Australian Royalty.

I’m an Aussie mongrel, my ancestors came to Oz from:
Twenty from England, Six from Ireland, Five from Prussia, One from Wales (the elusive Elias Jones) and another elusive ancestor, Samuel Drayton, from United States.

Did any of your ancestors arrive under their own financial steam?
Fourteen were "Assisted passengers",  nine were "Unassisted passengers", a further nine are unknown with three of those appearing to swim!.  Two ancestors were working on boats (a convict boat and a whaling boat) and decided to remain in Australia.

How many came as couples?
There were only two couples (husband and wife).

How many came as family groups?
The majority arrived as a family group.  Nine family groups made the voyage to Australia with five ancestors being younger than 10 years of age (the youngest being age two).  At age 22, Margaret Gully and her sister Ellen were very brave to make the journey to Australia from Ireland.  It must have been very difficult for my GGG Grandmother, Amelia "Jane" Bound (nee Congdon), who had recently been made a widow, to make the journey with 9 children, the youngest being 10 months old.

Did one person lead the way and others follow?
Yes, I immediately think of my GG Grandfather, James Pilgrim, who followed his older brother John to Australia and was soon followed by his younger sister Emma and her husband, with a further three siblings remaining in Essex.
What’s the longest journey they took to get here?
Over 3 years! Samuel Drayton boarded the whaling boat Sophia in Nantucket on the 15th June 1848. He was one of 25 crew. It is known that the schooner stopped at Pacific islands to offload barrels of sperm whale oil, arriving at Port Jackson, NSW,  on 28th October 1851.  I am hoping to get a copy of a log book detailing the voyage.  Fingers Crossed!
Did anyone make a two-step emigration via another place?
I believe that two of my unknown boat people may have left UK and spent time in USA and NZ respectively, before coming to Australia, which is why I cannot confirm their arrival details.

Which state(s)/colony did your ancestors arrive?  Did they settle and remain in one
state/colony? Did they stay in one town or move around?
13 Victoria,  12 South Australia, 2 Tasmania and one in NSW.  I also believe that one ancestor arrived in Queensland prior to making his way to Victoria.  However, I cannot prove it, as the relevant QLD immigration records were destroyed in floods.
Samuel Mottram, who was mentioned previously, arrived in Tasmania.  After two years, he went to WA, where the family stayed for 22 years before following their son to the Victorian goldfields. However many of the other children remained in WA.
Most of my boat people ancestors made their way to Victoria with a few remaining in SA.

Do you have any First Australians in your tree?
We may have aboriginal blood in one "branch" of the tree but it will need a DNA test to prove it.  On a different perspective, I am married to a "First Australian".  My husband's mother was born in Germany and his father in Romania whilst my husband was the "first" of his line to be born in Australia.  (I haven't done much work on his family tree).

Were any self-employed?
Yes, I have many farmers in my ancestry.

What occupations or industries did your earliest ancestors work in?
I have previously written about the occupations in my family history.  Those who arrived in Australia, were primarily farmers or miners. 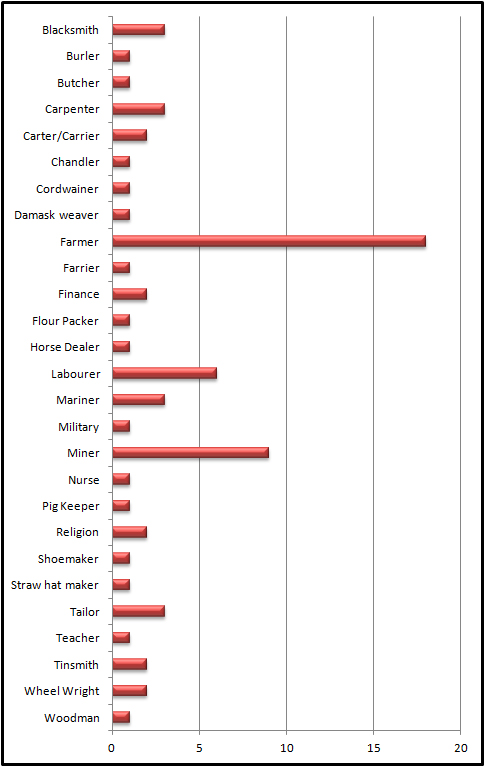 Does anyone in the family still follow that occupation?
James Pilgrim purchased farm land in 1882, which is now operated by his Great Grandson.   There are many properties in the area, which are owned by various members of the Pilgrim family.

Did any of your ancestors leave Australia and go “home”?
Only one that I am aware of but it was only for a visit to seemingly collect additional furniture and goods.


Now it's all about me

What's your State of Origin?
Victoria.

Do you still live there?
Yes, I have lived in 15 towns within the State of Victoria, which are
listed in another post.

Where was your favourite Aussie Holiday place as a child?
Nearly every school holidays, we would go to the "Beach House" at a tiny coastal town on the South East coast of Victoria.  My parents have lived there since they retired so I wont mention the name.  I still find it one of the most relaxing places to visit.

Any special place(s) that you like to holiday now?
My husband and I love to travel and see new places.  I have a list of places that I am "ticking off".  Our most recent holiday was to US.  It is my dream to spend 3 months in a campervan, travelling England, Ireland, Scotland and Wales, visiting all the places where my ancestors lived (but doing some touristy things too)..........................but that will need to wait until the kids have finished uni and/or I retire!

Share your favourite spot in Oz:
Now that is HARD as there are so many great places to see and things to do.  I keep going back to Cairns as my sisters live there.  I  don't think I could live there but I always enjoy it and there is always plenty to do and see.

Any great Aussie adventure you've had?
Jungle Surfing at Cape Tribulation and Climbing Sydney Harbour Bridge.  Hard to believe that I am scared of heights isn't it!

How do you celebrate Australia Day?
I don't tend to go to Australia Day events but instead use the time to do research and blog!

I thank my ancestors for making such sacrifices and having the courage to make such a long and difficult journey to Australia so that we can have a wonderful life now.
HAPPY AUSTRALIA DAY